Timeline of Events
at the Exodus

The following is based upon the principle that "a day can equal a year". In this adaptation of this well-known principle, the New Year at the time of the Exodus, (Spr. of 1446 BC, Nisan/Abib 1st). This day corresponds to, symbolically speaking, as AD 1, and therefore the next day, Nisan 2nd, as AD 2, and so forth.

This very simple truth unlocks much of the mystery surrounding the Bible numbers and interacts with the much larger timeframes of the bible that spans through the ages. This adaptation of the common day-year principle is discussed at length in the following document: "Each day equals a consecutive year/date of time."

(Note: The Israelites began counting their years from the New Year of the Exodus in the same way we today count from the birth of Christ as from AD 1, cf., Ex. 12:2; 1Kings 6:1.)

Two other significant patterns that are not in the above chart are:

(Click here for more on the "day equals a consecutive year/date of time" principle.)

The greatest of all patterns is well hidden, and is the key that unlocks the mysterious purpose for these patterns. These patterns interlock with the all of history so as to bind together biblical narratives by years intersecting with like days. Jesus Christ is the center of this great puzzle, and for this reason the following is true:

Each day count in the above table also represents a date. Day 15 (when they left Egypt) signifies AD 15; Day 410 (when they left Mount Sinai) signifies AD 410, and so on. This sort of thing holds true for the dates given by the prophet Ezekiel---and indeed, for all the bible. The author of this document has studied this phenomena for many thousands of hours, and is also certain of it by the Holy Spirit. The phenomena is entirely consistent on every level of study. Moreover, the dates given in AD consistently act like a mirror to dates in BC. For example, AD 410 would be the mirror of 410 BC,  and AD 450 would be the mirror of 450 BC. In our chart, Day 410 and 450 were the days when they left Mount Sinai, and when they were about to enter the Land, but instead spied it out the land. 430 from 18 BC/AD to 413 BC/AD "three day journeys from Egypt and Sinai. (also see 430 x2), and the seven day ordination to 7 day at mount Sinai with covenant and offerings are also 430---same pattern as Ezekiel. Also see 390 and 215, etc. (For multiple examples of the use of "430 days" within the dates surrounding the Exodus, click here!) 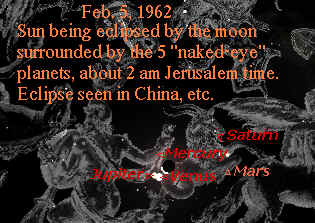 (Concerning the "1260 + 3½ days," see Revelation 12.) The above chart reveals that the 30 days and years (to 1995) of the great cycle of 3840 years are being emphasized by the heavenly signs. Days and years (and weeks) of the same value are intersecting each other in several ways!

But there is more. For instance, in the mirror, the call of Ezekiel (and his subsequent 430-day siege patterned after the 430-years in Egypt) happens to be 4300 day-years to AD 1845-1875, the mirror of 1876 to 1846 BC, which is where the 3840 cycle begins! etc. Thus we have the annunciation in the heavens concerning the last 30 years ('month') of the great 3840 and 4000-year cycles, which in turn is a way of saying that Jesus is coming soon. The heavenly signs are like the midnight chimes in Gods great clock that spans ages eternal. (There are a great number of 430-year patterns being used in the dates of Ezekiel, but we cannot elaborate them now. Moreover, the dates in the book of exodus and indeed all the dates in the bible are working along this same grid. Even the heavens are arrayed largely according to it. (Example, precession last 25800 years, which is 12900 x 2 or 60 x 430 years.)

These heavenly signs are simply part of the cycles and rhythms of the great heavenly clock God has set in the heavens that proclaims Jesus as Lord, (Genesis 1:14). They have nothing to do with horoscopes and the like, though the bible does mentions the name of some constellations as figurative of things, but their exact identities are hopelessly lost. We can only speculate about these things and perhaps ask whether during the future tribulation period God might use the existing understanding of the constellations in their corrupted mythological form to nevertheless mercifully speak to a rebellious world? They may not have the Bible, but they do have the stars. In any case, horoscopes and the charting of ones life by the stars is expressly forbidden in the bible. We can only know what we know, and whatever we don't know about the heavens one can rest assured that it, too, is a revelation about Yeshua (Jesus), and all else is completely incidental.

The same grid is also being forwarded from the fall of Jerusalem, not just as 1290 + 1290 and 1290 + 1260 years, but also by 1260 + 1335 years, (Daniel 12, Revelation 12, cf., Daniel 9:24-27). This makes Nisan (360 calendar) of AD 2010 to be as AD 1 as well---15 years above 1995, and 45 years above 1965. The recent events in the news have been unfolding chiefly along this new grid as the other grid fades out as it becomes distant. (Amazing, the previous points are still used and like the great symmetrical wheels of Ezekiel's chariot, they do not jostle one another.) For example, when the dates of Ezekiel are forwarded by the said 1260 + 1335 years (both bible numbers) the great tsunami of Dec. 26, 2004 occurred on the symbolic day/year of as 1877 BC. The next day (Dec. 27) was as 1876 BC. This is the year that Jacob entered Egypt 430 years until 1446 BC. It also happens that 1260000 days to the day before that was the exodus (and thus 10th and last plague upon Egypt) on the 360 calendar in literal 1446 BC. (See Revelation 12). It also happens that there is a possible plus 30-day from when the Exodus occurred on the 360 calendar, (as mentioned below). This means that there could also be 1260000 days to the symbolic date of 1846 BC, which is when this revelation is coming to me, (for that is what it is), which in turn gives me confidence that the heavenly signs of 1962 are not my imagination but inspired (loosely speaking) by God. For who could arrange such things but Him? Moreover, the sustaining manna began exactly one month after the exodus (Exodus 16), which agrees again with Revelation 12 about "the women being sustained in the desert 1260 days," about which scholars agree that it refers to the exodus and the giving of the manna 40 years in the wilderness! Much more could be said, but that is enough said for this article. (Click here for more.)

Moreover, the dates in Ezekiel are unique in that not only is 586 BC Nisan 1 presented as the beginning of the year counts, (I.e. in the 5th year of our captivity..."), but actual the year that Ezekiel personally went into Exile are especial emphasized. (In the numbers, what lacks in one way will be buttressed in another for balance.) That year began Nisan 597 BC---11 years before the 586 Nisan 1st dating system. (Hence, Ezekiel, by the Holy Spirit, used these two systems. See Ezekiel 1 and 40 for examples.) This 11-year difference means that the numbers before mentioned in the book of Ezekiel can all be set back by 11 years, which on the 360 calendar equals 3990 or 4020 days. What is totally amazing is that both sets of numbers perfectly complement one another!

For the full chart of dates surround the Exodus period see, "Timeline of Events Surrounding the Exodus"

Click here for more on the "day equals a consecutive year/date of time" principle.

See notes at bottom of page for the exact dates of where the 360 calendar lands.

Also see, "1290-thousand Days from The Day of Moses' Birth" unto Names Code.

Click here for more on the principle that "Each day equals a consecutive year/date of time".

More, see bible-numbers-revelation-key.
Also see the day/year grid and the timing of the exodus.

Pentecost: The day God intended Israel
to enter the Promised Land. An amazing pattern! Part 'B'

Click here for more on,
"A day equals a consecutive year/date of time" principle.

The dates in Ezekiel can also be reduced to symbolic day-years.

This chart does not speak about that, but is helpful for one to work them out themselves.
Eventually, I will put them in myself.