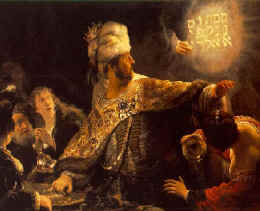 (Or, a Thousand Years)

The fact that a day can signify a year is of crucial importance in the study of the bible numbers.

Steve Gregg in his parallel commentary on the four main Protestant views of Revelation lists a number of outstanding theologians who have held the "historicist" view. (The "historicist" regards the Book of Revelation as a survey of the whole of Church history. Personally, I find that all four views compliment one another.)

Bible Numbers: A day can equal a year:

1) "A day for each year" in the account of the ten spies returning with a bad report to Moses about the Promised Land after spying it out for 40 days:

"Seventy weeks are determined upon thy people and upon thy holy city ... from the going forth of the commandment to restore and to build Jerusalem unto the Messiah the Prince shall be seven weeks, and threescore and two weeks ... And after threescore and two weeks shall Messiah be cut off, but not for himself: and the people of the prince that shall come shall destroy the city and the sanctuary; and the end thereof shall be with a flood, and unto the end of the war desolations are determined. And he shall confirm the covenant with many for one week: and in the midst of the week he shall cause the sacrifice and the oblation to cease..." (Daniel 9:24-27)

The "week" referred to here represents (primarily) a symbolic seven-year period. Thus once again, one day is made to signify one year. Here is why Daniel's "week" denotes seven years:

a) This vision (of ch. 9) came to Daniel upon his understanding that the 70 years of Israelite exile (as prophesied by Jeremiah) had just elapsed:

"In the first year of his reign I Daniel understood by books the number of the years, whereof the word of the LORD came to Jeremiah the prophet, that he would accomplish seventy years in the desolations of Jerusalem" (Daniel 9:2).

It is reasonable to deduce that since the occasion for Daniel's vision was his understanding of the 70 years of Jeremiah, and that since the vision to Daniel concerned a like number of 70 weeks, therefore 70 weeks can equal 70 (x 7) years. Nevertheless, Daniel's "week" as a literal 7-day-period is also a valid interpretation. Both days and years weave together.

b) Seventy literal weeks would not be enough time to accomplish all the things mentioned as having to transpire within the scope of Daniel's "seventy-weeks" vision. For this reason, most evangelical scholars view the seventy weeks of Daniel as symbolic years.

c) The Hebrew term for "weeks" is actually the plural of the word for "seven," without specifying whether it is days, months, or years; (see Walvoord "Daniel: The Key to Prophetic Revelation", p. 219).

d) Daniel's "seven-weeks" (49 days) can be understood symbolically as 49 years because of it's similarity with the seven weeks (49 days) till Pentecost; and the seven weeks of Pentecost follows the patters of the seven-times-seven years (49 years) of the Jubilee, (Deut. 16:9, Lev. 25:8).

A fuller treatment of the 1290 shall be explained elsewhere, but for now please note the following:

1) The Apostle Peter says that, "one day … is as a thousand years".

Peter seems to be quoting Moses in the book of Psalms.

"Lord, you have been our dwelling place throughout all generations...You turn men back to dust, saying, "Return to dust, O sons of men." For a thousand years in your sight are like a day that has just gone by, or like a watch in the night." (Psalm 90:1,3,4)

2) In Genesis 2:17, it says: "In the day you eat of the fruit of this tree you shall surely die." It is no coincidence that those who lived before the Flood died just short of a 1000 years of age. Thus figuratively speaking, Adam, and all his offspring before the flood, died within a "day"---that is, within a thousand years.

How Israel  became a nation in 1948 on the exact date predicted in the Bible,
1260 plus 1260 years from when Ezekiel received his vision of the new temple in Ezek. 40.

Timeline of Events Surrounding the Exodus:  The 360-Calendar, bible prophecy, and "day-years"

This powerful video is less than one minute long! Please share it!